First, CryptoPrevent now supports SSL/TLS encryption and StartTLS for your SMTP server settings!  This enables support for a wider variety of SMTP servers, allowing users requiring this level of encryption to configure their email alert functionality.  Previously only SSL was supported. 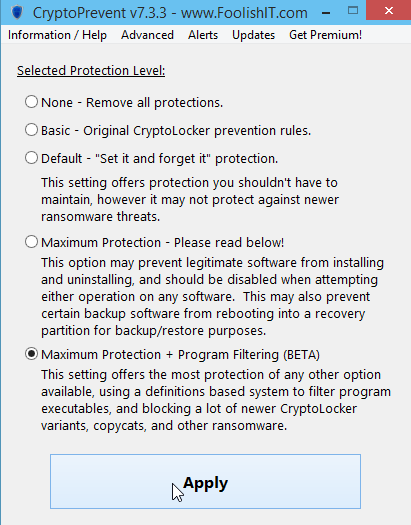 Does CryptoPrevent protect against ______ threat??

Good question, and I can’t answer it straight.  Here is the deal, as mostly described in the interface of CryptoPrevent pictured above.

A:  It does try to!  The Maximum Protection + Program Filtering (BETA) is obviously your best bet.  It isn’t a guarantee, nothing is!!!  Regardless, the definitions are updated weekly or sooner to stay on top of the latest known threats, and it is the perfect complement to your existing anti-virus / anti-malware / security solutions.

While I cannot quite recommend Maximum Protection + Program Filtering (BETA) to production systems and business environments, as it is still considered “BETA” just due to a lack of large scale testing, I do recommend it for those who understand they may need to disable it temporarily from time to time, and want the true MAX protection against the very latest threats.

So if you are trying to get the most out of CryptoPrevent, try the new Program Filtering (BETA) but remember, it is still considered BETA functionality, and you should remember to disable it if issues should arise (mostly with software installation.)   You can report any issues you may have with this level of protection at the support forums.

Now we finally have an option, or rather TWO options,[...]

After 2-3 years of Vaping not being enough…

We do not promote underage nicotine consumption, nor do we[...]