New Functionality and Improvements Since d7II

New ‘Config Mgmt Portal‘ (first item under the ‘Server’ menu) combines the separate dCloud/Self-Hosted FTP portals from d7II, and rewrites all server communication functionality with regard to config sets and definitions.  d7x v18.3.16.0 and above add user prompts if the technician password (used for archive encryption) is incorrect, allowing the option to retry as many times as necessary before failing.

New d7x Remote Deployment Tool (aka ‘d7xRDT’) can be created in the Config Mgmt Portal (above.)  d7xRDT is the new implementation of d7II’s ‘SFX Mini‘, and is re-coded from the ground up.  Although a little larger than before, it does enable more functionality.  While some new features are technically still on hold, this release adds a few improvements (over d7II SFX Mini functionality): 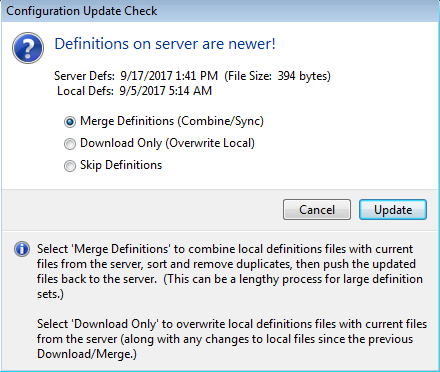 Config/definition storage and sync (dCloud/Self-Hosted FTP) functionality has been replaced entirely with new d7x code, and include a few minor new additions to the user experience, as evidenced by the optional startup prompt shown here.

This d7II feature is used to merge definitions when starting a new session, and in d7x it was expanded to offer a download only option, and a description of what the “merge” actually does.  When a config on the server is newer, this is also be an option within the same user prompt.

Note:  The data crunching part of the definitions “merge” is still handled by d7II code (in fact via the dFunk.exe module) as before, but d7II.exe’s involvement in determining updates, retrieving the current defs, and putting updates back on the server was replaced entirely with new d7x code.

KillEmAll v5 has been integrated into the core d7x binary, replacing the previous d7II based version of the program.  (It has not been included as a separate/stand-alone executable.)

Some issues discovered may or may not have been known in the final release of d7II v3.6.86, but were discovered while investigating ported code…

d7II.exe has been updated to v3.6.87 (version increment only) to satisfy future notification prompts, and made available for use as a backup in the event of d7x failure.  This should be done automatically when updating to d7x from d7II.exe, but if you aren’t updating from d7II you can always download this via the prompt using the d7x “Main” menu > “Check for Updates” option, or use this link.

UPDATE:  Some users have reported d7II.exe as zero byte after an update to d7x is initiated from within d7II; in this event, please delete the zero byte file and then re-download d7II.exe via the method above.

We now prefer d7II to reside in a .\d7IIv3 subdirectory from the main d7x folder (wherever your d7x vx.x.x.x.exe resides.)  Prior to the first time usage of d7II.exe, the .\Config directory should be copied into .\d7IIv3 directory, and if configuration changes were made through d7x that would affect d7II operation, the same should be done when starting a new session from d7II.  Copying the .\Config directory should not be necessary if it was done at least once at any point in time (unless d7x registration/account changes were made), or if you are resuming a previous session started by d7x.